Let’s get to the point. Mobile is growing. So is HTML5. Together they have triggered the rise of “Real time Web” and real-time web requires real-time technologies like Node.js.

Node.js is a server-side development technology that makes use of event-driven non-blocking I/O and prides itself on: using JavaScript, the language of the web. being able to bridge the gap between the front-end and server-side architectures. supporting code reuse at every level – client, server and even database (MongoDB).

Prime-time companies have relied on Node.js for their mobile solutions. LinkedIn is a prominent user. Their entire mobile stack is built on Node.js. They went from running 1 servers with 15 instances on each physical machine, to just 4 instances – that can handle double the traffic! eBay launched ql.io, a web query language for HTTP APIs, which uses Node.js as the runtime stack. They were able to tune a regular developer-quality Ubuntu workstation to handle more than 120,000 active connections per node.js process, with each connection consuming about 2kB memory! Walmart re-engineered its mobile app to use Node.js and pushed its JavaScript processing to the server. So, what is this Node.js and why has it been the primary choice of the big shots?

Node.js is open-source and has a strong and passionate community. It is the second most Popular Starred repository on Github. NPM is the node.js package manager, used to install node programs. There are thousands of developers contributing modules to NPM and providing incremental updates and additions to Node. Though Node.js is relatively new – it has some awesome frameworks that help reduce the load to a great extent.

Node’s speed and scalability comes largely from its asynchronous programming model. Traditional web application software is based around the request-response cycle. A request arrives; the application routes it, builds up a response by consulting databases, disks, APIs, etc., and finally sends the completed response back to the client. Node is similar in design to and influenced by systems like Ruby’s EventMachine or Python’s Twisted. Node takes a step further and presents the event loop as a language construct. Node simply enters the event loop after executing the input script. Node exits the event loop when there are no more callbacks to perform. This behavior is like browser JavaScript — the event loop is hidden from the user. Node’s specialty is high-concurrency, real-time applications: anything where you need to have a large number of users connected at the same time. But Node can be used to serve any website or application, and it will do so with its characteristic speed and efficiency.

Node.js allows you to tune page rendering between client and server based on the network.  Maybe you are already using frameworks like underscore, handlebars, react , mustache or jade   to generate views in the front-end based on the JSON/XML data received from the backend. Now, you can use the  same code to do rendering on the server.

Push Notifications It’s possible for NodeJS to interface with the various push notification systems available on each platform, or to use something like SocketIO to provide real-time communications between client and server.

Over the past few years, Node.js has grown to be widely popular for developing web applications. The primary reason for this is that it enables front-end developers to write server-side code using JavaScript. Some of the potential benefits of this are smaller development teams and faster development cycles, in part because it’s no longer necessary to maintain separate teams of back-end and front-end developers.

Node.JS is extremely robust in handling dynamic and large database related applications and with globalization; no application is expected to carry or target a small audience. Carrying this thought to the right, we have expanded our wings by entering into complete Node.JS development and solution services.

Nacios love Node.js and its ecosystem

Nacios Technologies provides vibrant and versatile application development services based on Node.js platform. Our last work was Lexgenda a web application that allows you to search legal judgments issued by the italian courts. 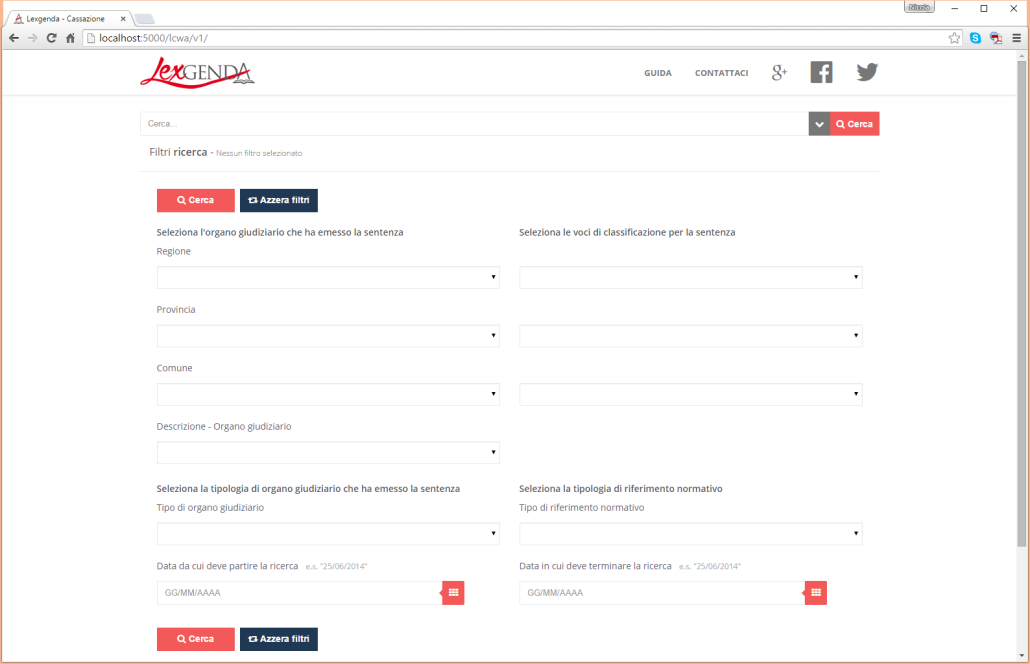 In the past year we used the most popular framework to develop with Node.js stack and we started to release our modules for the community. If you interest in what we create visit our space in GitHub or NPM:

Today we are building others services using Node.js, so if you interested in that, please contact us, we will be happy to help you with a consulting or to create another wonderful systems.